In 2007, PGCOS received a Government of Canada New Horizons for Seniors grant to create written biographies of ordinary local pioneers by documenting their everyday work and concerns before the arrival of the pulp mills. Editorial committee members, Bev Christensen, Luci Redmond, and June Chamberland, all volunteered countless hours recording and collecting, selecting, then editing and preparing this lively and entertaining collection of stories and photographs.

Life Before the Pulpmills is available at the Seniors Resource Centre, 721 Victoria Street, Prince George, BC. 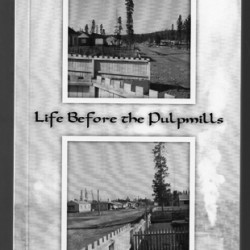 Bits from the book:

“I can remember the smells of the livery stable on Fifth Avenue, the blacksmith shop next to it …” (John Warner)

Many Prince George people used to go down to see the train arrive, especially when it was a nice summer evening for a walk.” (L. George Gibbons)

“Everett’s job was to cut the long trees into log lengths and cut off the limbs. … Everett went to work with … crepe-soled shoes and dress pants until we received our first cheque.” (Dorothy Giese)

“As times got better we were able to afford a gas powered wringer washing machine.” (Rosella (Sally) Denis)

“The CCF Hall was also a favourable location for the Saturday night dances that took place there. With all the loggers in from the bush, the stag line took up half the hall …” (Doreen Gray)

” … I discovered deposits of ash and cinders from those [beehive] burners in the crotch of every pair of panties on the line.”

” … if somebody owed the hospital money, they could bring in a side of beef and be credited for it. There was a lot of that kind of bartering.” (Winnie (Warner) Russell)

“One Christmas Day the power went out because of overload and Jack Cabot, from the radio station, and my dad, who was then the mayor, drove all over town announcing over a bull horn that everyone needed to turn off all their lights and stoves, so they could get the power plant back up and running … everyone’s Christmas dinner was late that year.”

“We used to have house parties, card parties, and Stanley and Tupperware teas. We all played family games such as whist, canasta, crib, and crokinole. As soon as a child could sit, they were included.”(Margaret Grieves)